Aug 23, A wise woman once said when it comes to dating, you're either dating, exclusive, or single--so which one is it? If you don't know, you're in the.
Table of contents

Create a category, make a post, join the fun! In relationships, can a slow start ever really pick up speed? December 5, Or does it need to be BAM: I have been seeing a fellow for the last 3 and a half months - we met through mutual friends, were instantly attracted to one another, turned out to have a lot of things in common, and have been seeing one another since.


But after the initial period of excitement when he was chasing after me, it hasn't really gone anywhere. We meet up a couple times a week, have a lot of laughs, enjoy ourselves, have off-the-charts chemistry in the bedroom. We'll sometimes spend long aimless weekend days together, enjoying each other's company. But he never expresses the slightest hint of how he feels - no expressions of affection, of closeness, no off-hand sweet comments. If you read the transcript of our conversations, you'd assume we were just buddies. When I try to say sweet things to him, he'll sort of deflect them away, so I've stopped.

He's not a big relationship talker, but he has told me that he loves spending time with me, and is really attracted to me, but doesn't want to move too quickly into something serious. We don't hold hands in public, and he only recently has started showing affection when we're out in public. I thoroughly enjoy my time with him and I value his company.

I spend much more time thinking about him than I should. I've been through a very momentous breakup earlier this year and being with him has helped me regain perspective and set me right. But there's the pride and self esteem issue. I'm pretty nuts about him, and I can't help but worry that I'm just passing the time for him, and he's essentially reluctant to start a real relationship with me. I'm not usually on this side of the coin - I don't know how to react to a guy that's not enthusiastically pursuing me.

I felt that we have been slowly growing closer together, and that maybe this process of really becoming friends was a good foundation for the possibility of real devotion to form. But then a friend was telling me about her reconnection with an old flame, and how at the end of their first weekend together, and all-night sessions talking adoringly, they were professing this incredible draw to one another.

It made me feel a bit depressed, and I thought: I want us to be jumping out of our skins for one another. I'm ready to jump out of my skin for him, but he's obviously not with me. Or am I more likely than not just fooling myself that this can go anywhere? I don't think I need to be in a serious relationship right now, but I guess I want to know if there's any potential or if I'm just a good time gal ouch. So my question is: It's unfortunate that you've framed your question as if the point were to take a survey of people who happen to have Metafilter accounts about how their relationships progressed.

The real issue is: Have you talked with him about this? But he never expresses the slightest hint of how he feels He in fact seems quite willing and able to tell you how he feels. The fact that he's not expressing affection or closeness is not him not expressing how he feels, it's him not doing things he doesn't want to do. To answer your direct question, I have never once in my life experienced a relationship developing into committed love after initial disinterest by either myself or the guy.

7 Signs You're Moving Too Fast When You're Dating Someone

I'm just saying, you might want to rethink whether it's a good idea to stay with him in a casual relationship out of thinking that's all you can get from him and it's worth it to sacrifice what you really want to have it for a time. Look, my moral views aside, any guy who wasn't being publically affectionate with me outside the bedroom wouldn't be getting into my pants IN the bedroom.

In our case, it was because he had just gotten out of long term relationship about four months before we met, and was still grieving the relationship. He admitted to me much long after the fact that he felt like he was "cheating" on his ex when we started going out. I completely sensed that he was not over her, and was actually about to break up with him but it was December, and I decided to wait until after the holidays.

But then magically, a switch flipped. He was suddenly just more present We still took things slowly I didn't meet his friends until we'd been dating almost a year , but he was totally there for emotionally, and was loving in all the ways I needed to be loved.

So even though it was a bit of a slow start, we created a very firm basis for what's been an amazing relationship, that's weathered some tremendous ups and downs. So to answer your question But you have to decide whether you feel like rolling the dice, and how long you are willing to wait to see if this relationship will blossom. I have a very different perspective than Ashley For me, three and half months is definitely not a long enough period of time to consider myself in a serious relationship, no matter how well it's going!

Great attraction and compatibility at the point make me want to continue dating, enjoying our time together, getting to know the person on a deeper level. But I don't feel that 3. But our pace was very similar to the pace in your relationship The transition to serious relationship happened gradually. We have now been together 3.

I love my boyfriend dearly now, but definately was hesitant in the first few months. Three months feels like a very short time to me, I didn't know him well enough to know if we could really work together, little things made me wonder if we were just incompatible in some ways. But as it turns out, we work very well together, and Im very glad i gave it a chance.

Unless there are some definite reasons right now that make you feel you two aren't a good long-term match, give it some time. 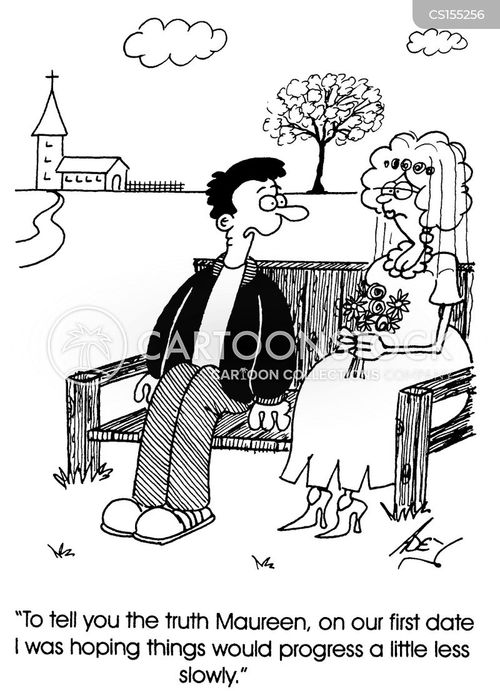 What does he usually do? Because if this is part of a pattern for him-- he takes awhile and then falls for someone-- then maybe it's worth waiting. But if he always dates like this and he's never gotten majorly attached to any girl, then This could totally still take off. First of all, I speak as someone whose lovey-dovey feelings for my BF really launched into the stratosphere several years!

That's probably an extreme example, but the timing isn't always right for people. People aren't always walking around ready to meet Mr. Right, with no baggage or life stress, fully ready for intimacy.


This could result in you wasting your time on a guy who's not worth dating. Likewise, if he's being lazy about dating you, you might end up having to do the chasing, which isn't a sign of a healthy relationship. Here are 10 signs he's moving too fast and 10 signs that he's got to pick up some speed, otherwise, you're heading for a dating dead-end. Meeting the folks is a big step in a relationship.

It's not something that most people take lightly, especially because they want to feel secure in their relationships before bringing them into the rest of their lives. It's important to know that the person's right for you and has long-term potential before you let them meet your loved ones.

Besides, what's the rush? Isn't it better to see where you're both at before you make your relationship experience the stress and seriousness of meeting the parents? When a guy tells you that he's in love with you when he doesn't know who you really are and what you're about, you have to ask yourself if he's perhaps feeling lust instead of love.